Here’s another example from my Advanced Typography class at Sessions College. In this lesson, students were required to develop a logo and package design for a box of popcorn. The design, logo, and typography should be representative of a subculture. I chose film noir lovers as my subculture. This design also was featured in the student gallery, which you can view here.

Here’s how I approached the design:

THE CONCEPT An image of a book cover by Louise Fili really inspired me when it came time to search for my subculture. I chose “film noir lovers” for my target audience. I researched numerous sites and Google image searches to decide which elements might make for a good film noir look. The styles of movie posters ranged from black and white to vivid color, and from hand-drawn typography and line art to more modern typeset letters and photos. I also chose to use a black box for two reasons: It supports the style of the genre and it also would be the only black box of popcorn on the shelf–something that would differentiate this brand from the others.

THE DESIGN One common thread among the posters was some type of slanted or curved text. Actors’ and directors’ names often were set as a small first name on one deck, and a larger last name on a deck beneath. I used both these devices when devising the logo and typographic voice of the box.

Typography and headers:I experimented with several fonts, and ended up using Tandelle Bold. It’s a slightly condensed and elongated typeface, which is perfect for this genre. I then set three items along the bottom using a Brush Script on the top deck and Tandelle on the bottom deck. The text surrounding the film reel is Bodega Sans, a typeface that I think depicts the era well and also one of the finalists for my popcorn brand name. The smaller side-panel text is set in Myriad Pro bold.

Art and imagery: I created the reel and film banner for the logo in Illustrator. It’s shaded in a lighter gray to allow the brand name to pop. The reel, film, and curve of the logotype are emblematic of the genre. The bowl of popcorn was shot on my kitchen counter against a cardboard box backdrop using the Hipstamatic app on my iPhone. A little touch up was done in Photoshop, and in keeping with the style of the genre, the popcorn was kept in BW with a film grain to enhance the theme. The other elements (bar code and nutrition box) were taken from stock art sites. 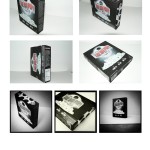 THE IMAGES I have two logo ideas I was working with—one red, the other black. I really liked the look of the black logo, but after mulling it, decided the red wold work better from brand awareness and shopper recognition. I printed the box on letter-size paper and almost ran out of black ink. The photos show a few angles and I also included a few of the shots taken with the Hipstamatic app.

“Intention is so important. You have a clear focused and well-defined intentionality on this design. The iconography on the logo, the color choices, and the whole approach is excellent. You have distilled this design problem down to its most effective features. I think you succeed on all levels here.” —Andrew Shalat